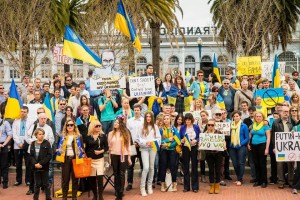 San Francisco, CA – March 10, 2014  -  Over one hundred people rallied on March 9, 2014, in San Francisco’s Justin Herman plaza at the Embarcadero to show appreciation for US support of an independent and democratic Ukraine and to ask for continued US engagement in resolving Russia’s occupation of Crimea.

On February 28th, the Russian Federation invaded a sovereign country, Ukraine, by sending troops to the Crimea Peninsula on the south of Ukraine.  It has been reported in the news that Russian operatives were sent to Eastern Ukraine in Russian government’s effort to interfere with the new temporary Ukrainian government’s intent to hold free and fair Presidential elections in May 2014, after the disgraced former President Viktor Yanukovich was removed by Ukraine’s Parliament.

At the rally, an open-mic was made available to speakers who shared their perspectives on the political crisis in Ukraine.  Speakers included Americans of Russian descent who expressed outrage over Vladimir Putin’s aggression toward Ukraine.

A number of speakers expressed their gratitude to President Obama, the members of the US Congress, and the Secretary of State John Kerry for the United States’ diplomatic and economic support. “Today is the 200th anniversary of the birth of one of Ukraine’s national heroes, Taras Shevchenko” said Iryna Bilokin, a recent immigrant to the Bay Area from Kyiv, Ukraine.  “His 19th Century poetry and political writings captured the spirit of Ukrainian serfs’ resistance against subjugation under Tsarist Russia.  Today, unfortunately, Shevchenko’s words are as relevant as ever while Ukrainians continue to struggle against Putin’s aggression and political interference.  I appreciate the US government’s diplomatic efforts and support of Ukraine, and I believe that through the joint effort of the international community, peace in Ukraine and faith in the rule of international law can be restored.”

A number of Americans also expressed their support for an independent and democratic Ukraine.  “The security of the United States and our European allies is bolstered by the expansion of democracy and economic stability in Ukraine, not in the appeasement of a failed empire intent on reviving an antiquated vision that has no place in the 21st Century” said Melanie McCutchan of Mill Valley, CA.  “Continued strong U.S. engagement will ensure that Ukraine’s over 45 million people have a chance to determine their political future.”

This demonstration was not sponsored by nor affiliated with any governmental or non-governmental organizations, political groups, or parties.

Photos from the event are here.